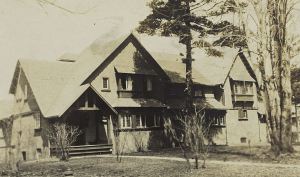 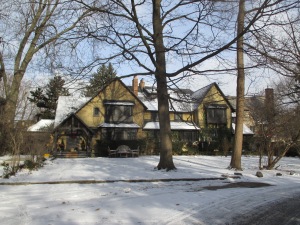 George A. Reid (1860-1947) towards the end of his career compiled a scrapbook in his Wychwood Park home.

Flipping through it, one is struck by the contrasting types of personal archiving going on.  Small sketches that offer glimpses to his thinking are sprinkled in with standard scrapbook material in the form of press clippings documenting his life and career.   The sketches are short-hand notations for his paintings. The most interesting show Reid’s efforts to retain through visual memory, a living link to family members who had cleared the land.  The clippings, on the other hand, tell a more forward-looking story. They show how he and fellow artist and wife Mary Hiester Reid as leaders of the art community were part of a Toronto cultural coming of age just before the First World War.

One page of the scrapbook features a family tree that Reid composed with portraits he had taken of grandparents and parents.  Other pages feature sketches of the log cabin in which he was born. 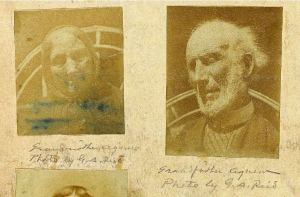 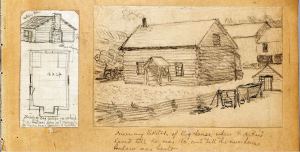 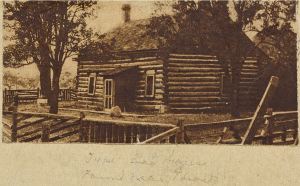 A photograph of a log house near Toronto reveals the artist’s perception of these humble dwellings as monuments to the determination and ingenuity of settlers. His large-scale paintings convey their heroic feats as central to Canada’s founding. However, the theme of pioneer bravery in the face of adversity could be a hard sell. Unable to get backers for a series of City Hall murals featuring stalwart homesteaders he went ahead and produced them on his own.

The reviews of his 1892 decoration of City Hall focused on his generosity with the time and effort it required. This came on top of that spring’s review of The Foreclosure of the Mortgage that mocked its heavy-handed pathos and pretentious size.

The Royal Canadian Academy and the Ontario Society of Artists have the last few years been sure of one large picture for their annual exhibitions. G.A. Reid has not disappointed them this year, but has increased the size of his canvas to the gallery’s limit, in height at least.  The “Foreclosure of the Mortgage,” let us hope, is the finale of that story. Mr. Reid has brought this typical Canadian family through many trials, but we trust that his next effort will not show them on their way “over the hills to the poor house.” We do not think the size of the picture has increased its interest … O.S.A. Exhibition, The Globe, May 30, 1892 p4 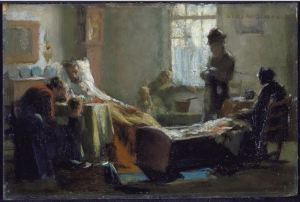 Foreclosure of the Mortgage (1892)

The same year, Reid had the opportunity to put his own cabin-making skills to use in designing his summer cottage in Onteora, an artists’ colony in the Catskills. In a carefully composed portrait he presents himself in the glory of his hand-hewn natural setting.

Park     In 1907 George and Mary Hiester Reid moved into Uplands Cottage in Wychwood Park, a private residential enclave set in a wooded hillside crossed by a stream and a landscaped pond at the park centre. The scrapbook page featuring views of the cottage include photographer William James’ portrait of Mary Hiester Reid in her Arts and Crafts inglenook. 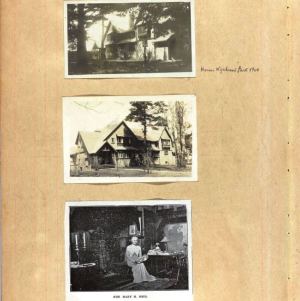 The community on the Davenport embankment was founded in 1889 by painter Marmaduke Matthews to provide himself and other like-minded creative types with an idyllic setting within reach of the city. 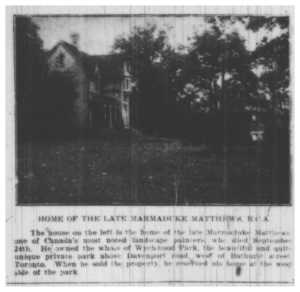 Matthew’s vision of his bucolic surroundings Summer Morning, Wychwood Park (1889)  is in the collection of City of Toronto Library. 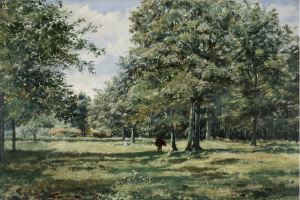 Like Matthews, Reid relied on the landscaped park to maintain his sense of living close to nature. His landscapes are at times titled with place names as they celebrate, for example, the picturesque river valleys on the edges of town. Alternatively they are named generically for their subject. In an auction house listing of a handful of Reid’s paintings and pastels one can see that beyond the precisely titled Early Autumn, Wychwood Park, the small canvases titled The Brook and The Pond could also have been painted or inspired by the park’s stock picturesque features also captured by William James with his camera. 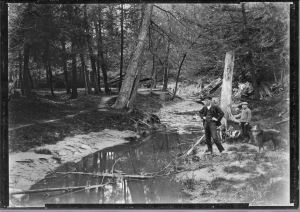 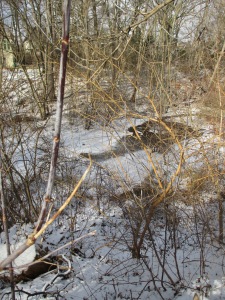 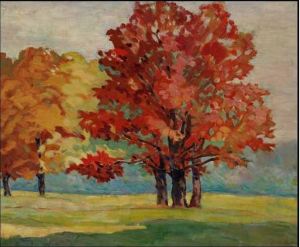 Suburbs     Along with Lawren Harris and other local artists who were interested in representing everyday surroundings, Reid was drawn to the new landscapes on the edge of town. These were the suburban frontiers where houses were springing up on farm fields. He would not have had to go far from his home in Wychwood Park.  Nearby, Helena and Alcina avenues were only partially built up presenting the artist with an opportunity to explore the open and built spaces of vacant lots with his brush. 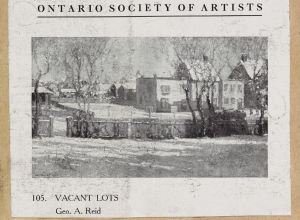 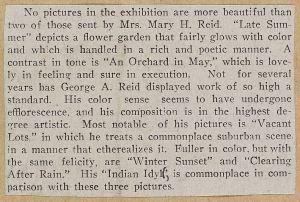 Figures     As instructor and, after 1912, Principal at the Ontario College of Art and Industrial Design, Reid taught how to draw and paint the human figure.  Among his favorite models was his wife. Mary Hiester Reid can be seen in her husband’s paintings both in portraits and as the central figure in Mortgaging the Homestead (1890). 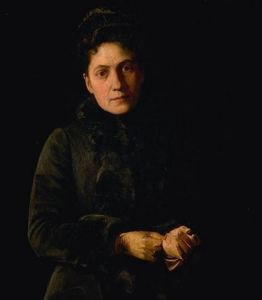 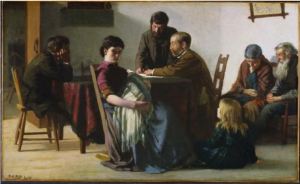 In photos by William James published in the Sunday Toronto World, April 9, 1911 with the caption, “Life Class of the Ontario School of Arts, The Grange”, “Mac the Model” one of the art school’s regular models is posed repairing a snowshoe. 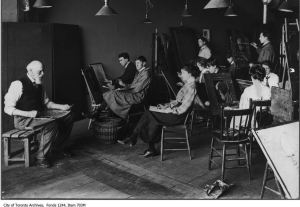 The figure of the venerable old man is a constant in Reid’s pioneer paintings; the artist’s earliest models for this type, as evident in the scrapbook, were his own male forebears. 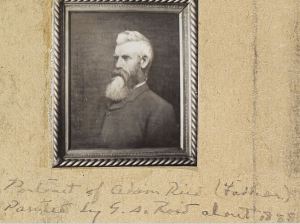 The Reids were among the leading artists to pose for William James. A series of artists in their studio portraits including Robert Ford Gagen, John William Beatty, Frederick H. Brigden and Frederic Marlett Bell-Smith were likely done by James for the 1911  “Prominent Canadian Artists” Canadian Courier series. 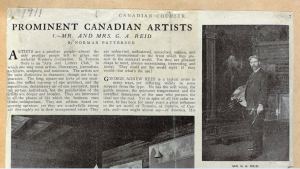 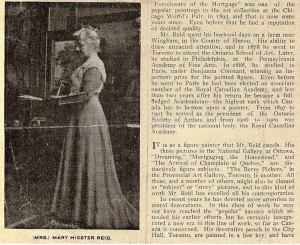 They reflect the popular interest in the city’s artists in the years preceding the 1913 opening of the Art Museum of Toronto in its permanent quarters.

The Reid portraits were also published in the Star Weekly feature “A Social Sunday in the Reid Studio” on September 28, 1912. 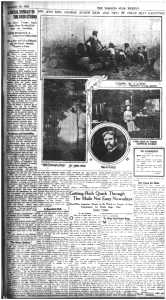 The Grange, a well-known estate home and grounds had been left to the City for use as an art museum and school.  However, the museum as an organizational entity dated from 1900 and shows were presented under its banner in various locations until it was assigned an exhibition space in the upper rooms of the College Street Reference library in 1910. 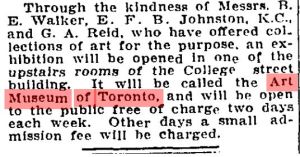 The range of work on view at the Ontario Society of Artists 1911 exhibition and the way that they were appreciated is captured in a short report of a guided tour given to a group of Toronto ladies. 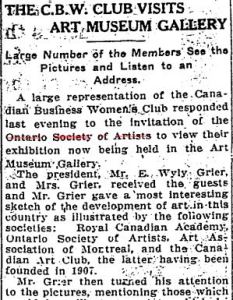 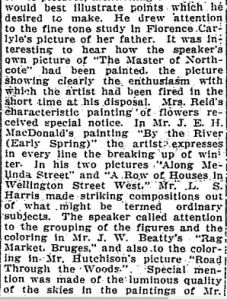 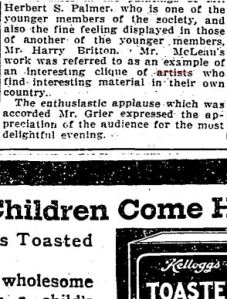 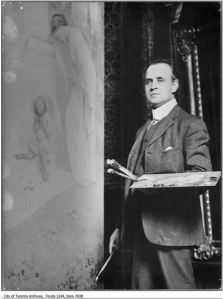 Around the same time local dailies began to print short reports on the return of well-known local artists from places of picturesque interest, so raising anticipation of the works that would later emerge later in the year. The highlight of the art community calendar was the annual Ontario Society of Artists exhibition held in April along with the art show that was part of the Canadian National Exhibition every August. 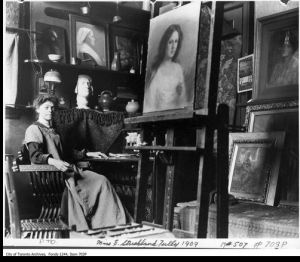 George Reid, as the Principal of the art school that shared the art museum’s new premises was interviewed in a Star Weekly story on the aspiring artists and art teachers who trained there. The reporter, who titled the article “Would-Be Artists Training School” highlights the novel atmosphere of the school, its students and classes for a readership with little knowledge and likely much skepticism about the world it represented. 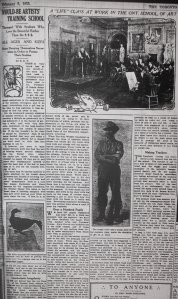 Art critic Christopher Hume has written about William James’ body of work as a grand collective portrait representing the diversity and specialization of roles, the human effort and ingenuity that made up the city. The artists that James’ portrayed, brushes poised over a painting amid their canvas-crowded studios, were spotlighted through the popular press in the years just before the First World War as important players in the newly cosmopolitan stage of Toronto.

This post is linked to two previous ones on George A. Reid and Mary Hiester Reid:

still-life in winter light   and   mural 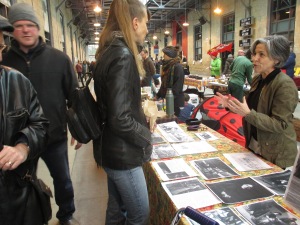