On the  Davenport escarpment just west of Spadina Road passersby in 1912 could see a billboard announcing the sale of lots on the Walmer Hill subdivision with the words “Deep Lots Well Restricted”.

“Restricted” meant that zoning bylaws ensured the neighborhood would be reserved for luxury homes. It was often paired in real estate advertisements with the expression “high class”. Among the classiest of individual’s drawn to Walmer Hill was financier Henry Pellatt. His social aspirations drove him to build such a massive home that it defied the formula for calculating property tax. Pellatt’s tax bill would eventually ruin him and burden taxpayers with a residential property of such impractical scale that it was early and universally declared a white elephant. 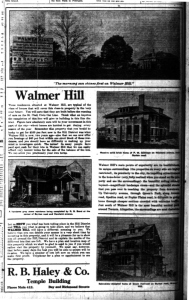 Toronto’s Greatest Real Estate Year Are You Taking Full Advantage of It? The headline was The Toronto Daily Star‘s challenge to its readers on the first of May 1912. Replete with subdivision advertisements, the edition offered information on how to make a profit by investing in land within the settlement zones recently widened through annexations. A map with outwardly radiating circles offered a glimpse of the booming real estate activity and land speculation in the city and its environs.

Both geographically near the city centre and yet far, buffered from noxious air and urban eye-sores by its elevation and woodland ravine, the Davenport escarpment had long been the site of elegant country villas such as Spadina House, headquarters of the prominent Austin family.

Walmer Hill’s main points of superiority are its healthfulness, its unique surroundings (the properties on every side are highly restricted), its proximity to the city, its impelling attractiveness to the home-lover (only fully realized when you stand on the property and see the surroundings), the beautiful rolling country beyond—magnificent landscape views—and the splendid streets you pass over in reaching the property from downtown. Up University avenue, through Queen’s Park, along Avenue road, Spadina road, or Poplar Plains road is different to going home through cheaper sections crowded with vehicular traffic.  …

The subdivision’s  privileged remove from city conditions was enhanced by its connection to the system of grand civic boulevards and picturesque winding local streets. Hill residents could motor to stores and offices in the city centre buffered from the sight of weed-filled vacant lots, derelict housing or industrial plants.

The promised Walmer Hill  view down to the city below would however be reserved for the biggest land investor, Sir Henry Pellat who constructed his home on the brow of the hill between 1911 and 1914. 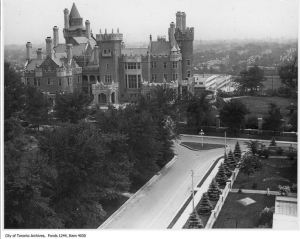 View of Casa Loma from tower of stables

Casa Loma symbolized Sir Henry Pellatt’s colonial wish to belong to an English noble lineage.   It was a testament to the concentration of capital among financiers who made fortunes through interdependent investments in land, mining, railroads, insurance and banking.

Toronto citizens had directly contributed to the funds for the fantasy residence. In 1903 Pellat won the franchise to supply the city with electricity from his Niagara Falls generator; the responsibility for local electricity distribution was transferred to a public utility after a 1907 referendum.

Pellatt’s love of pomp, ceremony and self-display set him apart from other Toronto financiers, bankers and merchants many of whom had a Methodist horror of material show and ostentatiousness. 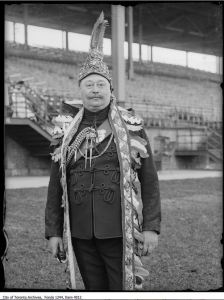 He was knighted in 1905 for his support and leadership of the Toronto militia regiment, the Queen’s Own Rifles. On his trip to England to receive the honor he was accompanied by architect E.J. Lennox who had over the course of the previous thirty years put his stamp on Toronto with his signature Richardsonian Romanesque style. Evident most notably in the look of City Hall, it reflected Toronto’s sense of itself as stolid and happily tradition-bound.

Lennox-designed houses confer the Annex neighborhood south of Casa Loma its particular atmosphere. There, the brick and stone cut homes, bastions of respectability face the street like tightly corseted, embroidery crusted ladies. In the design of Casa Loma, far above the Annex decorous bay-and-gable roofs, the architect would be given license to improvise stylistically on an epic scale . 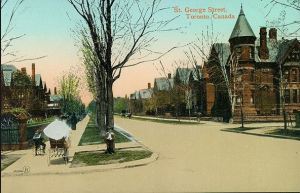 During their 1905 trip to England Pellatt and Lennox bought land from the grand-daughter of Colonel Joseph Wells, settler and builder of his estate “Davenport” from which Toronto’s midtown escarpment derived its name. The financier bought twenty-five acres, his architect three. Pellatt sketched features of stately homes that had caught his fancy; it was the job of Lennox to fuse these together as Sir Henry’s dream home. Upon completing it the architect constructed his own just west of Casa Loma where he had a view of the castle from his bedroom window.

Press photos of Casa Loma as it was being constructed attempted to convey its astounding dimensions by including a figure of a man for scale.

The estate’s gardens, put in at an early stage of the construction so that plants would be established when the castle was completed, were a showpieces of elegant landscaping and horticultural variety.

The first journalists to see it reported that the castle’s outward historical appearance was complemented by its modern built-in electrical amenities. Dotted around the grounds was a network of streetlamps that lit up the grounds at night basking Pellat in the glow of his electrical empire. 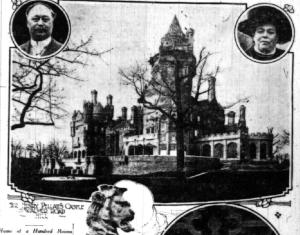 The great hall… is eighty feet square by seventy feet high.  This will be magnificently paneled in oak from floor to roof while the roof also will be of oak paneling and the trusses supporting the roof will be carved in oak and decorated with oak tracery panels. The fireplace in the great hall will be canopied and well recessed imparting to the whole the genuine Tudor tone… flush with the second floor of the building is the organ chamber awaiting the electric organ which has been purchased for the trifle of seventy five thousand dollars. … The corridors on the ground and second floors are intended also to serve the purpose of art galleries, and there are special lighting arrangements for displaying the masterpieces which will hang there, to every advantage.  There are no fewer than five thousand electric lights in the building and the wiring in connection with them is seven hundred and fifty thousand feet in length. All the electric lights are controlled by one automatic board. And from five different positions in the building it is possible to turn on all the lights in the house and grounds.  One of these positions is Sir Henry Pellatt’s own bedroom, so, if he ever suffers from sleeplessness at night…he has this, a novel form of amusement at hand.

One comes away from a tour of the castle feeling stunned and stupefied. Everything is on so huge a scale. And yet, while money is being poured into this mansion almost like water, the taste displayed in the general scheme of decoration is admirable.  … Yet one thing is lacking. In the panelling of the corridor of the second floor, close to Sir Henry’s bedroom there is a device whereby the paneling will slide back and disclose a private passage leading to his office on the ground floor. If a secret passage why not a ghost? Possibly this, too will arrive later from England…

But the imagination utterly fails to grasp what will be the cost of the annual upkeep. The Star Weekly was informed that something between forty and fifty servants would have to be employed indoors. But it is difficult to imagine that even the larger number would suffice for the work of this house… And then there is the cost of the lighting, heating, repairing, and general upkeep of the fabric, as to which one can only be thankful that it falls on shoulders which are presumably well able to bear it.

In the winter of 1913 Sir Henry and his wife installed themselves in their new home while it was still under construction and  embarked on a regular schedule of receptions. Lady Mary as Chief Commissioner of the Girl Guides of Canada welcomed a troop of local guides and toured a coterie of society ladies around the new conservatory. 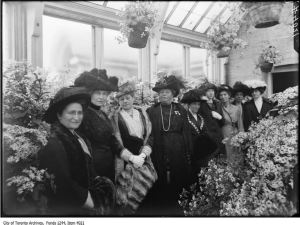 Skeptics argued that living on the scale demanded by Casa Loma was not sustainable even for a man of Sir Henry’s means. Their number grew when the Star reported that he would be hit with a colossal property tax bill beginning in 1915. When the land had been purchased it had been outside the city line, annexation multiplied its value bringing an exponential rise in tax rate. There was also the question of how the castle added to the value of land that was zoned as strictly residential. What was the market value of the behemoth Casa Loma given that it was un-marketable as a home?

That Sir Henry Pellat will receive a big increase in the assessment of his land next year, was the statement made by Assessment Commissioner Forman to-day following reduction from $350,000 to $100,000 made on his palatial residence “The Castle” by Judge Winchester. The assessment department assessed the building at $350,000. Sir Henry appealed to the Court of Revision and lost. Judge Winchester reduced it to $200,000 yesterday on the ground that the building could not be sold.

Sir Henry Pellatt’s struggle in the courts to reduce his taxes dragged on year after year. In the meantime Casa Loma and his equally grand country home were money sink holes. 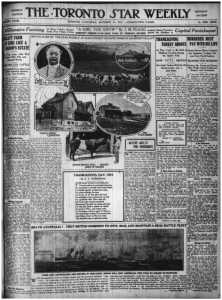 Sir Henry in a military parade

The outbreak of the war in 1914 provided Pellatt with an ideal opportunity to don his favorite costume, the dress uniform of Q.O.R.commander.  Fate had conspired to give him the ideal stage to display his allegiance to crown and country. Throughout the war he convened military brass, politicians and local society at Casa Loma to raise funds and view inspections, drilling and marching. Sir Henry’s son, Reginald Pellatt, trained officers and led recruits on marches to Cedarvale Park passing under Casa Loma’s heraldic stone lions, ramparts and turrets to the delight of his father. 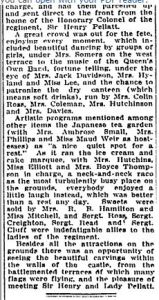 In 1922 Pellatt was informed that Casa Loma’s assessment, long been held at $100,000 as a result of repeated appeals, would be doubled the following year. A 1914 scheme by Pellat for developing a residential subdivision along the edge of Cedarvale ravine had been aborted by the outbreak of the war and he had been forced to gradually sell-off the land surrounding Casa Loma. The family auctioned-off the castle’s contents at a great loss and retreated to their country home north of the city.

Throughout the twenties a series of proposals to make Casa Loma pay for itself were advanced and tested. There was the plan to make it into a hotel or luxury apartments… the enormity of the physical plant, local opposition to commercial use and expansion of the parking premises defeated each in turn. Walmer Hill’s long-cherished image as a private residential enclave removed from trade and traffic undermined attempts to re-purpose Sir Henry’s residence.

The city would put Casa Loma up for sale in 1932 and finally acquire the property several years later. It granted a long-term lease to use the castle as a destination and event venue  to the Kiwanis and more recently, this year, to Liberty Grand Entertainment Group. 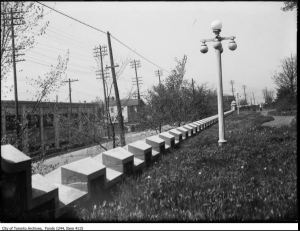 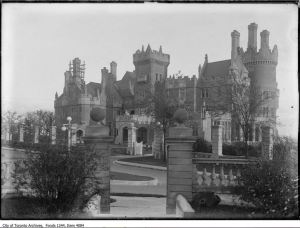 market square conversations on the legacy of Casa Loma

The White Stone in the Wall written by Sheldon Oberman, illustrated by Les Tait (Juvenile Fiction)

Toronto to 1918: An Illustrated History by J.M.S. Careless