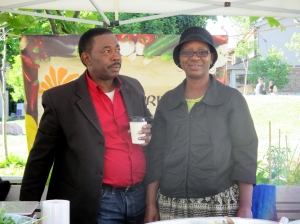 At the Wychwood market each Saturday one can find two married couples who are new farmers. One, Paul Stewart & Shira Katzberg (Footsteps Organics) is in the first years of food-growing while the other, Margaret Zondo and Rodney Garnes (Southern Horizons) has just over five years of experience. They are supported by FarmStarts, an organization that runs a 45 acre facility where 36 novice growers have small scale intensive farming lots along with a tractor for rent, water access and expert guidance in business planning and marketing.

FarmStarts’ McVean “incubator farm” is on the edge of the Humber River on Toronto Region Conservation Authority land about forty kilometers north-west of the city. A constant wind blows through the fields drying the clay soil.  Stones deposited by prehistoric glacial drifts pop up daily along with thistles whose seeds are spread by the river wind. From many spots on the farm one can hear traffic and see suburban houses and the towers of a massive industrial plant in the horizon.

Near the site  Alexander McVean built one of the first grist and sawmills in the area.That was in 1834. Now his barn at the centre of the FarmStarts market gardens stands as a memorial to grain farming’s peak years in Peel County. As the Heritage Brampton panel indicates, the structure’s design featured a central space for “fanning”, harnessing the wind to separate the wheat kernel from the chaff. 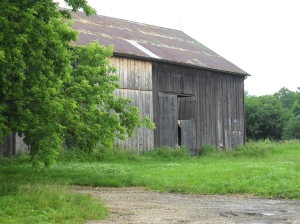 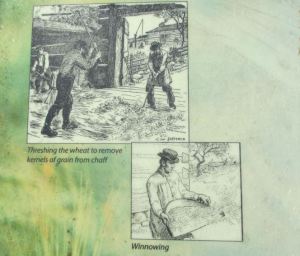 By Confederation the western provinces had usurped Ontario as the prime agricultural zone. The soil here had been depleted and many farmers were selling and moving on. Those who stayed turned to the more sustainable practices of their British, Scottish and Irish forebears that combined the tending of animals on fields to enrich the soil, crop rotation and intense fertilizing. The diary of a young farmer learning his trade who worked land close to the McVean farm reveals the planting patterns, animal husbandry and farm labour of a hundred acre operation in 1873.

FarmStarts farmers for the most part are city people. Some have other jobs and shuttle back and forth from field to office. The rural culture of the McVean familyhas long disappeared and even a century ago was understood to be on the wane. This fueled a taste for commercial photography, stereoscopic images and postcards, representing rural heritage.

Photographic Record of a Disappearing Culture

In 1876 Reuben R. Sallows, began his career as a photographer in Goderich Ontario.  Representing an established photographer, he traveled to farms and villages taking portraits of people in their Sunday best posing stiffly before the camera. After five years he bought out the owner of the studio and set up shop under his own name. The popularity of stereoscopic images and postcards pushed him towards a style of image—small staged scenes and landscapes—that would prevail in all of his work. 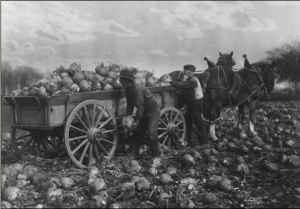 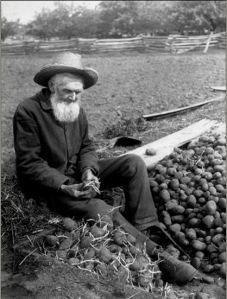 Sallows’ ability to create technically polished, aesthetically pleasing and strongly narrative images brought him success as a commercial photographer with a range of clients including Canadian railway companies, print publications and the Department of Agriculture. While his subjects ranged from outdoor sports to landscapes he is now best known for scenes of farm life. These, are on view at the Sallows Gallery in Goderich which displays them online in a digital library. These celebratory depictions of farm labour were already appreciated a century ago as evocations of a mythic time in Ontario history. 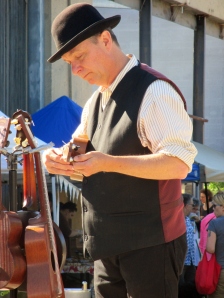 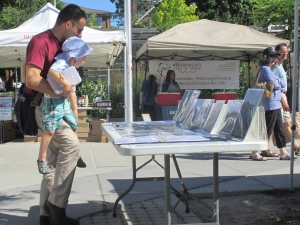