Wanderers along the Rosedale Ravine drive, who enter by Yonge street, have doubtlessly noticed with wonderment a factory-looking building just where Severn street meets the drive. Three storeys in height, of brick and concrete, with the northern side almost completely constructed of glass, it has led to many inquiries as to what factory had invaded that particular park district.  The Toronto Daily Star, Feb. 28, 1914

Financed by painter Lawren Harris and art patron James MacCallum, the Studio Building east of Yorkville in the Rosedale ravine was, according to the national heritage plaque now on the site, ‘the first purpose-built artists’ studios and residence in Canada.’ Eden Smith, architect of choice for Toronto artists, designed it to precise specifications. It was intended to be nothing less than the production centre for a new kind of art that embodied the Canadian spirit.

Lawren Harris recalled how, in those years, Torontonians’ Euro-centric taste drove them to decorate their walls with dark, fussy paintings of windmills and canals. Rebelling against this pinched outlook, he and a handful of artist colleagues set out to discover what Canadian painting could be if it was created under the direct influence of the environment. The approach was to interpret the spirit of a place as it could be felt. Starting with inner city neighbourhoods, Harris ventured out in ever-widening arcs to the most remote locations.

It was the discovery of this great… land as a field of art that enticed and inspired these painters. This discovery was gradual… it commenced with the streets in the older parts of the city and then to its outer fringe where it met the countryside…and then, into the rural districts and beyond these into the pioneering settlements and finally to the great north of almost endless lakes, hills, rivers and forests.  It became a deeply moving experience of search for one-ness with the land and a continuous search for the way to permit it to dictate, guide and instruct us of how it should be painted.

There was never any doubt that the Canadian spirit resided not in the city but rather in the North from which emanated purifying gusts of fresh air. As Harris put it, “The whole country was cleansed by the pristine and replenished air and the psychic health which sweeps out of that hinterland.”

A.Y. Jackson in the Studio Building 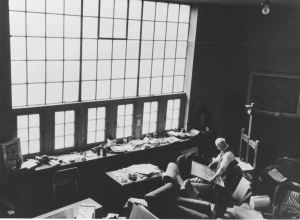 With its brick, concrete and glass construction permitting high ceilings, ample air, light and space, the Studio Building was where paintings done directly from nature were completed. Through annual exhibitions in Toronto and Ottawa ‘the Group of Seven’ became the standard-bearers of cultural nationalism. By the early nineteen forties, as seen in the NFB’s portrayal of A.Y. Jackson, some group members were very comfortably ensconced in what was already shrine of Canadian art. 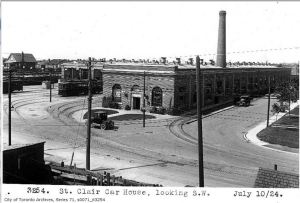 The Civic Car Line’s brick and concrete repair/storage facility built between 1913 and 1921 re- opened as an Artscape project in 2008. The northern-most of the original five barns was adapted for artists’ live-work studios. Three of the 26 tiny rent-geared-to-income apartment studios whose north-facing windows look out on Benson Avenue held open studios for Toronto’s Doors’ Open celebration last Saturday.

A quick discussion with these artists and glance at their work reveals how they’ve optimized their allotted space through specific art making strategies.

Like other residents, Wayne Wightman uses his studio window as an exhibition space.  He identifies himself as primarily a formalist, drawn especially to the tactile, volumetric properties of materials and things. The unique objects he has produced this winter, sculpted, plastered and printed with fragmentary photo images seem to perform twisting, crouching or flying moves in the narrow ledge stage of his window.

A series of tapered three-sided vertical forms hold titles each beginning with the word CONTRAPPOSTO. ‘The works change directions in space three times as they rise upward from their bases,’ points out the artist. ‘This echoes the use of counterpoise (“contrapposto” in Italian) by the ancient Greeks in their sculptures of the human form.’ On two of the works a subtle association with the human figure and memory is created through photo transfers and first names in the titles.

Wayne has an urge this spring to create a looming version of CONTRAPPOSTO to ‘address the street’ from his minuscule yard beside the sidewalk. He feels that using diagonals in the piece he has in mind would provide an interesting counterpoint to the right angles of the building’s architecture. Grateful for the extra studio space the yard area provides in the summer however, this is more idle vision than working proposal. While working in the open air draws potentially disruptive interest from passersby, he understands that this is part of the dynamic of Artscape projects. 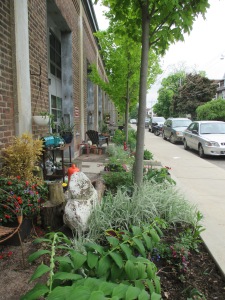 The summer provides a welcome expansion of personal space. Artists personalize their front yards with plants, garden furniture and quirky lawn ornaments.  The balance of the year is a test in how to ward off claustrophobia while also producing art. 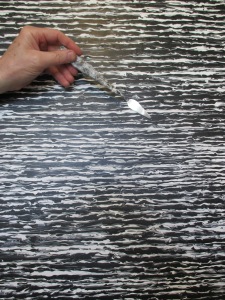 A painting in Wayne’s studio hints at how space can exponentially increase when one switches to an almost microscopic field of vision. The work was created with ketchup and mustard dispenser extrusions of parallel black and white paint lines on a canvas placed horizontally on his kitchen table. During the 48 hours in which it goes from liquid to solid state he works with a palette knife and chance movement of the paint as it pools in furrows and oozes over these edges. The work takes on a monumental scale as for two days he is immersed in a six inch quadrant of the painting before proceeding to the next. Emerging gradually, the composition is an accumulation of detail; hundreds of hours in the tiny incidental world of this painting must help to feel the studio walls recede. 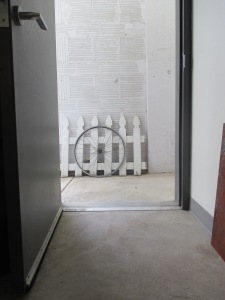 Jordan Dunlop’s work emerges from his long walks. “I don’t try to reproduce the walk but create a suggestive parallel to it through an installation of painting, expressive drawings and found objects.”

At his studio entrance he’s placed a section of a picket fence, edge-marker of a home base, in relation to a bicycle wheel, suggestive of movement beyond it.  The wheel-fence relationship serves as sign post to work within the studio. 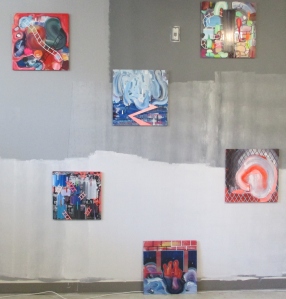 In preparation for the open house, Jordan transformed his 450 square foot space. He primed his east wall with grey toned brush-work to set off his Plexiglas square paintings. In these, kinetic lines probe and careen through spaces created by lush manipulation of color. The overall composition is lightly held together with bits of crisp geometric patterns.  These are journeys digested, amplified and retraced over time. 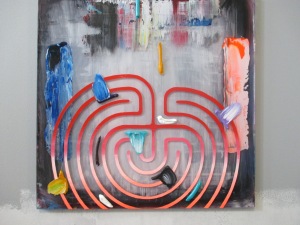 A major advantage to using a transparent ‘canvas’ for Jordan is the possibility of turning over the painting and continuing the composition through its mirror form. The flip offers him a familiar yet novel pictorial space to continue his exploration. With his east wall installation Jordan offers a taste of the enormous varieties of space created by painting and the way that these offer perception-shifting experiences. 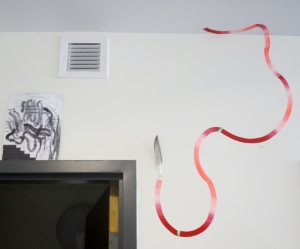 Above the door jamb of his washroom Jordan’s signature free-wheeling line appears in pink.  The painter’s tape ascends or descends, linking wall and ceiling, creating a dialogue with the air vent and the twisting marker line drawing above the door. 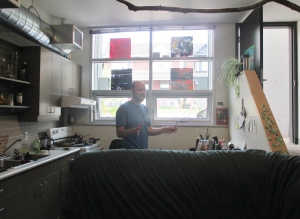 In his most recent series of works, a stone lion appears as a theme. Titled ‘The Garden Sculptures’ and shown in his window ledge, these are notations of front yards as places of symbolic and magical thinking. The lion, it is said, confers luck. Jordan places it in his threshold as a talisman for himself and his community. 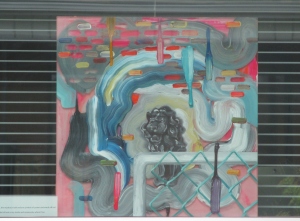 A portion of a chain link fence, a common device for separating private property from public space, is visible in one of these works. This detail may be a reflection of a neighboring artist’s raised planter recently wrapped in a mesh fencing to protect the vegetables from potential passer-by poachers. The tension between the Artscape’s necessary embrace of the public and residents’ desire to shelter their property is heightened by the fact that the site is also a highly popular park.

Gregory Edwards moved to Canada from New York City in the 1990’s, just in time to experience the cataclysmic shift in photography from film to digital. His practice never recovered.  During the Doors Open weekend he was toying with his new tablet device, making plans to dispose of his dark room equipment and pondering the next phase of his stagnating career. A demonstration work, the portrait of renowned Flamenco dancer, Esmeralda Enrique that he was showing for Doors Open, was also on view four years ago six months after the barns’ opening. 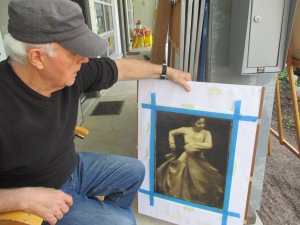 The dominance of digital production in commercial work drew Gregory back to a much earlier tradition of carefully printed and hand-finished one-of-a-kind prints. ‘I like the old dark room techniques, the meditative space of repetitive work looking at details.’ After processing the original image through alternating digital and film versions for subtle effects, Gregory applies five to six layers of glaze that he rubs ‘like shoe polish’ to create the highly burnished warm glow of Victorian pictorial photography.

The photographer is hopeful now that film photography is on the edge of extinction, that it will be once again embraced. ‘The people who are keeping it going are the young people learning such old techniques as tin types. Once something has been dropped, it’s attractive.’

However, having endured the drawn-out isolating winter, Gregory is unsure whether he will be able face it again. The combination of intense cold and darkness of the bunker-like studio has stiffened his resolve to search for new possibilities. He may soon be putting a lot of his vintage box cameras on the market.

The three Artscape artists’ processes have been developed for the small scale studio. The ledge window space used to individualize each one’s portion of a concentrated collective space also invites feedback from fellow residents and gives the building the stamp of artists’ colony. Far from the Group of Seven goal of searching for an all-encompassing Canadian spirit, these Artscape artists are creatures of the city operating in the interpenetrating spaces of studio and street.