Toronto was known as “the city of homes”. It was not only the curb appeal of a residence that marked its occupants’ status but  also the first-impression character of a neighbourhood. Citizens organized in  ratepayers’ groups to work for the improvement and upkeep of  their area’s streets and gardens. 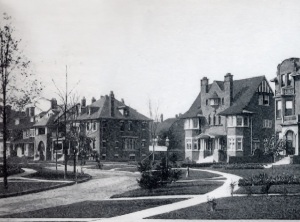 The beautification of newer neighbourhoods on the city margins was considered important to individual and collective health. Concerned citizens felt that Nature in its cultivated form as gardens could prevail over the demeaning effect of these districts of half-built homes with provisional arrangements for living. 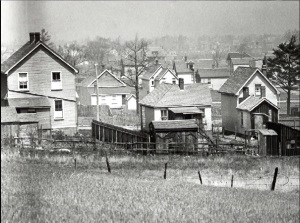 The more privileged city residents who lived in fully serviced districts within city boundaries exhorted those who lived in  “shack town” where there were no sewers, water, road paving or other infrastructure, to plant gardens in yards and vacant lots.

Many of the outlying districts settled in a scattershot manner were officially absorbed by the city between the turn of the century and 1914. The annexation was ultimately due to rising concerns over the need to impose sanitary and other safety standards in the unplanned suburbs. 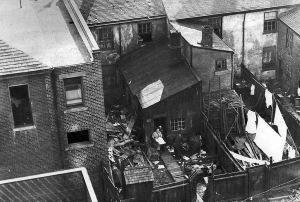 The cost and scarcity of low income housing became a visible problem in Toronto between 1900 and 1910.

“Tenements” was a term loosely given to the ramshackle overcrowded housing that dominated certain downtown wards. The problem of “the ward” (St. John’s Ward)  related to unsanitary conditions, ineffective shelter, and pests that made the infectious disease outbreaks common. Such zones were considered to be crucibles of vice and crime. Disaffected workers and “foreigners” who congregated there represented dangerously loose threads in the social fabric. 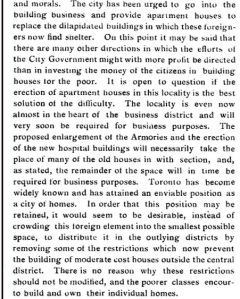 In his study of the un-annexed districts, Unplanned Suburbs, Richard Harris has pointed to the contemporary preoccupation with the separation of one family’s living quarters from others as well the amount of frontage required to maintain the distinction between private and public space. Crowded housing was thought to undermine a community’s moral standards; the privacy of the family and the dominion of the worker over his own living space was essential to the development of civic values. 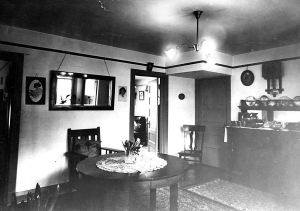 The focus of architect Eden Smith’s design for Spruce Court and Riverdale Court, the city’s first venture into public housing, was a large grass courtyard, a form of “common” where children could play, sheltered from the dangers and temptations of the city streets. 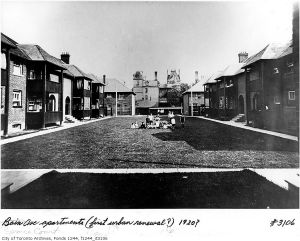 The design feature of grass areas separated from surrounding streets and within grouped community housing was carried over to the Regent Park development in the early 1960’s. Sadly, the grassy commons and isolation from surrounding neighbourhood proved to have the opposite of its intended effect, isolating the most vulnerable with the most predatory members of the community outside of the normalizing influence of the wider city.

To read more go to Menu: “Paving the Way to Paradise…”  Chapter 3.