Several weeks ago henna artist Noam Sienna and I sat down to ponder the legacy of Charlie White (see previous post) as one of the pioneers of body art in Toronto. He described how such open air attractions as the Canadian National Exhibition, depicted in William James’ lantern slide views below, traded in the excitement of exotic and wild yet tamed creatures. Within this category was the increasingly popular urban professional, the tattoo artist. 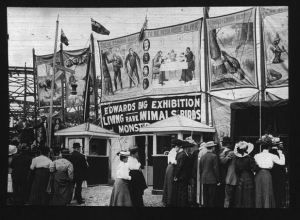 NS: The portrait of Charlie White is interesting because historically there was a blurring between a tattoo artist and a tattooed person, a heavily tattooed person. This was the case especially in the context of side shows like Buffalo Bill or the Barnum and Bailey Circus and other travelling freak or circus side shows. There would often be a tattooed man or tattooed woman who was exhibited and they would make up stories like, “this person was kidnapped by savage Indians in some strange countries and held down and tattooed…”

TC: Like a human travelogue. A white person being submitted to …

NS: Right a very popular narrative which always ended with the fact that they escaped and made it back to civilization and yet they really haven’t because their body…

TC: Their body modification has forever marked them as marginal…

NS: Exactly, they’ve been forcibly relegated to the margins by virtue of their tattoos. All of this was just side show hype. In fact many of these tattooed men and women were themselves tattoo artists. So you could sit down with them and get a little ink.

NS: What’s interesting to me as an artist is to think about these people who were advertised as tattooed freaks but then part of the show was that they could also tattoo you as part of the experience.  It’s funny because that’s what we’re going to be doing… I’m going to bring my stuff to this market and we’re recreating this experience that you can take a little bit of it home yourself. They would set up these tents, these travelling tattooists would model all of their tattoos and then they would sit down and you could get a little one done. So they were also artists. 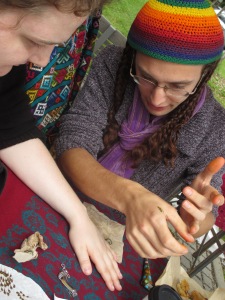 People have always been getting tattooed and yet from around 1920 to 1970 there was a really intense desire to retroactively associate tattoos with negative, criminal behaviour.  Yet the truth is that ordinary normal people would get tattoos as souvenirs from, for example, the Buffalo Bill Wild West Show. 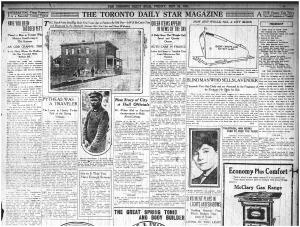 TC: And he has claims to being authentic because he learned his art from “the Indian” and then he “elevated the art of his dusky master”.

NS: Yeah, after all he’s from Toronto. But again, it’s like these side show tattoo people. The tattoos allow them to perform an exotic identity. He’s a regular Torontonian and yet he wears this skin from the Indian territories. He got tattooed in Oklahoma travelled with the Wild West show. And he’s assumed this crazy Western accent, “Pardner” and “Howdy”.  He’s managed to transform himself …

And at the next level of interpretation the reporter is transcribing Charlie White’s words and trying to capture the rough voice. Or maybe it’s not Charlie’s voice and the reporter is dramatizing the character.

TC: Trying to give him the varnish of the Wild West Show.

NS: And in this article Charlie White says he tattoos a lot of sailors, but also women and Chinese immigrants were getting identifications in Chinese characters.

“That there Chink who was killed by an automobile night before last,” says Charlie, “had his name on his shoulder for identification—a piece of my work. Chinks are so afraid of being thrown into the ground un-known. Lots of them come in to have their names and addresses put on their arms in Chink letters.”

TC: He refers to the “squiggles” that he’s tattooed as an identifying mark created expressly for that moment that he reads in the paper when his client’s body was found. Perhaps the tattoo was made so that the soul would not go astray: “This body belongs to this individual.”

Charlie White in this quote seems to be alluding to the conversation that he must have had as he tattooed the guy. And I guess this is a very strong part of what you do… You converse as you imprint someone’s design on the skin.

NS: Of course, it’s a very intimate art form. I don’t do tattoo, I do henna but it’s roughly the same thing. Body arts require you to be in physical contact with another person.  You’re not only in conversation with the person but it’s a very intimate connection. And my sense is that even then, Charlie White is trying to make the Chinese client’s meaning more legible, to explain the personal signification of the tattoo to the public.

TC: He seems to be very up to date on modern tattooing techniques. In his Queen Street store he’s using electricity for his needles, a wide range of colours…

NS: This period, the first decade of the twentieth century is the big leap in tattooing from what might be called traditional tattooing techniques that involve manually dipping needles them in ink and pricking the skin. The electric tattoo allows you to do it quickly more cheaply, and with a wider range of designs. This heralds the age of the commercial tattoo artist.