The Rosedale residential subdivision’s distinguishing feature was that it was designed to fit within the existing  landscape.  In its earliest and most picturesque local form this ideal of adaptive planning was epitomized by the artists’ colony of Wychwood Park. Established in 1873, it was the project of landscape painter Marmaduke Matthews who bought 10 acres of wooded property on the Davenport embankment where it was traversed by  Taddle Creek.

Eden Smith, a resident of the park during the high point of its development between 1907 and 1911, designed many of its houses in an ‘Arts and Crafts’ style. The term was familiar through the efforts of the Women’s Art Association to promote the new aesthetic in sales of art and handicrafts. Teas and lectures through the years 1904 to 1907 drew ladies to marvel at hand-made creations that pitted the dying arts and cherished ideals of English country honesty and simplicity in utilitarian objects against the ugliness of their mass-produced counterparts.

The residential park attracted artists such as the George Reid and his wife Mary Hiester Reid whose studio was recreated many decades later, using a William James photograph, at the Art Gallery of Ontario as an illustration of the integrated design approach advocated by this  movement.

The roads within the park  followed a twisting path offering fresh vistas of the forest and creek at every turn. In contrast, one city block east of the park, the Bathhurst-Davenport intersection provided a different form of scenic interest. Before this section of Bathurst Street was graded and paved it was notoriously difficult for any form of wheeled transport to negotiate.

William James’ photographs document the struggles of vehicles of all types to make it to the top of the mid-town summit. Here, the grid of the city plan outlined by its roads followed the surveyors’ concession lines imposing a north-south axis despite the obstacles of natural geography.

The Davenport mid-town was most famously the observation look-out on the city from Casa Loma, the showplace castle residence constructed for Henry Pellat between 1911 and 1914. A new subdivision in south Forest Hill and just west of this behemoth was marketed in 1912.  The advertisement for ‘Walmer Hill”  runs down the checklist of attributes sought by contemporary home buyers.

Walmer Hill …adjoins the Hill District, overlooks it, drains with it, is restricted with it approached by it, built like it…. Walmer Hill is the closest subdivision to Avenue Road, and St. Clair Avenue hence the closest to the business centre of the city.  … Again we say that is the closest in HIGH CLASS subdivision.  The lots are all well restricted… Every house or garage or coach house must be of brick or stone, and must be built a definite distance from the street, must be detached, can be used for no business of any nature whatsoever, excepting that of a Dentist or a Medical Practitioner. Buildings must be a definite distance from the next lot, and the restrictions, concerning height and location of the fences must be complied with… Walmer Hill is situated in the healthiest, cleanest part of Toronto. The prevailing winds are from the north and northwest; pure, fresh, exhilarating, healthful air comes in unobstructed from the fields and hills and valleys of York Township.  Not a factory or a railroad car near; there is never a trace of smoke or dirt or grime or soot such as one encounters in every other direction from the centre of the city. … The view obtainable is magnificent. 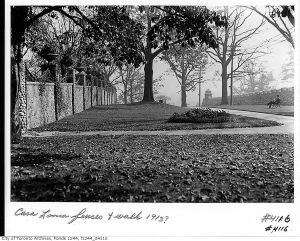 Although York Township began about four blocks north of Davenport on St. Clair Avenue, the Toronto streetcar line ended at the foot of the embankment on Bathurst. Commuters, who lived in the un-annexed frontiers used the plank sidewalks on their daily northward trek home from  the city centre.

The mix of residential subdivisions–planned and un-planned, serviced and un-serviced, on the street grid and off–made this district bounded by Wychwood Park, St. Clair Avenue, south Forest Hill and Davenport Street  an area of dramatic contrasts in homes and streets.  A mark of a luxury residential location was proximity to the city along with detachment from its distasteful conditions through its being buffered from these by the area’s natural features.  Individual homeowner attitudes towards being protected from or embracing city density were to shape a debate a century later over what form of neighborhood park should be developed.

To read more go to Menu: “Paving the Way to Paradise…”  Chapter 4.