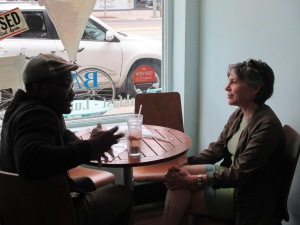 According to Adrian Hayles, Toronto street artists owe a lot to “taggers”. Rob Ford’s graffiti crack-down forced many home and business owners to commission murals under the threat of fines if they did not clean-up their tagged walls.   StreetARToronto offers an artist directory, as well as funding so that community groups can revitalize public space through street art, and a gallery of the city’s growing mural inventory.

In partnership with the Oakwood Village Arts Committee (OVAC) in 2013 Adrian developed a mural that wrapped around and over a bench on the Vaughan and Oakwood traffic island. At the centre of a particularly unlovely intersection near Eglinton, the island is surrounded by idling cars, fast food and convenience stores, a street-front health clinic, and worship halls.

Playing with the double meaning of the word, Island celebrated the Caribbean roots of area residents. 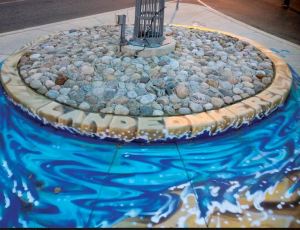 Like other successful examples of street art, the work caused passers-by to pause and look afresh at where they were standing. The image appeared to move fluidly on the pavement. Boats seemingly moored to the bench swayed when viewed different angles and from a marked spot on the pavement they popped out as a 3D image. 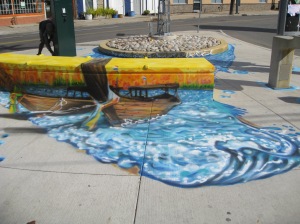 “When you’re walking around it looks all skewed,” says Hayles, “but if you look at it from the right angle it all makes sense. That’s the idea of challenging the viewer instead of doing something that’s completely literal to the space; it forces the viewer to move around it and explore.”

The defining characteristic of any mural is that it is done directly onto the surface of a wall, or in the case of Island, on the pavement.  Street art takes the punishment of traffic and weather and this winter’s extreme cold and heavy salting took their toll. “When it comes to concrete against earth, the earth is a living organism,” explains Adrian. “It breathes, and as conditions are always changing it affects the piece.“ Only traces of the original mural are now visible. In the next several months, in collaboration with OVAC, he will develop a new mural that will most likely work with the wall of the public health clinic.

George A. Reid and city murals

Thanks to the depth of talent, Toronto has become a North American destination for street art followers. The quality of the murals, their inventive interface with the myriad distinctively shaped public spaces and city support for street art marks this as a place of vibrant urban culture.

Over a century ago, the creation of an epic historical narrative popularized through murals in public buildings was the goal of artist George A. Reid. His attempts to do this are documented in his scrapbook within the George Agnew Reid Fonds of the Art Gallery of Ontario. Two mural projects stand-out for their local relevance, one created in 1899 and long obliterated from the entrance of Old City Hall and another, from 1925, recently uncovered and restored in a district library.

Popular with both critics and the public,  George A. Reid drew large crowds to his exhibitions in the 1890’s. He rode the wave of acclaim to the position of painting instructor and eventually Principal of the Central Ontario School of Art and Design. There, he entrenched the training traditions of European academic painting that revolved around drawing from still life, human models and plaster casts.  Students developed the skills to paint scenes that dramatically told a story through characters’ poses, light effects and setting. 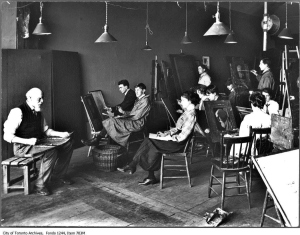 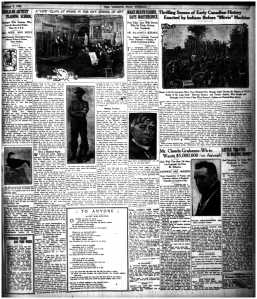 Reid was supported in his 1895 City Hall mural proposal by the Guild of Civic Arts, an organization dedicated to integrating beauty at all levels of the city’s design that promoted the importance of murals. The new building’s architect J. Lennox also encouraged him, seeing the proposed murals within the trend set at the 1893 Chicago World Columbian Exposition where prominent American artists had decorated the walls with illustrations of, “…achievements of a people, their ideals and ambitions.” (p.199) Reid himself was not compensated by any group or patron despite or, given Toronto’s Methodist no-nonsense culture, as a result of his mural project’s lofty ambitions.

The City Hall mural figures embodied inspirational virtues and deeds. Woodsmen, surveyors and farmers, grouped in classical frieze style could be admired by Torontonians passing through the entrance. These, for Reid, were the titans. They were the action heroes of settlement and wellspring of civic and national pride.

Over two decades after the 1899 unveiling of the City Hall mural, Reid won a Royal Canadian Academy of Arts competition for public building mural designs. His project, developed for the Adult Reading Room of the Earlscourt Library and completed in 1926, was a carefully conceived program of symbols tailor-made for this key community space. In 1964 the murals were covered when the branch was modernized. Through the leadership of the Regal Heights Residents Association, they were uncovered and restored during the building’s 2008 renovation.

A detailed description of the Earlscourt Library mural appears on a printed page torn from a publication, labeled “1926” and pasted into p. 372 of the scrapbook:

“Descriptive Note of the Mural Decorations in the Earlscourt Library by George A. Reid Under the Auspices of the Royal Canadian Academy of Arts”

The general subject “Community Life” “treated in an ideal manner using a sylvan and pastoral type of landscape as the setting for five groups of figures representing “ The Family”,   “The Community”, “The Story Hour”, “Philosophy” and “Nature Study”

The Panel representing “The Family” occupies space on the east end of the room over the fireplace and in this position fittingly typifies the centre and foundation of the community. The group of six figures is placed in a garden as signifying the culture of the soil for sustenance and the love of beauty.

The Panel representing “The Community” occupies the centre of the south wall. This is the largest group and is composed of the various kinds of persons forming the community. Children, youths and maidens are closely seated around a reader who stands leaning agains the bole of a tree, while scattered out to the side and front are the more mature members, all listening to the reader with absorbed interest.

At each end of this Panel are placed the Panels “Philosophy” at the east and “Nature Study” at the west. “Philosopy” shows the mature side of Community Life with the devotees of thought in profound discussion. “Nature Study” is represented by a group of boys and girls examining with their teacher, the specimens they have gathered in woods and stream.  The west end is taken up entirely with a large group of children who listen intently to the teller of the story.   The north wall which is broken up by windows is entirely given up to a continuous stretch of sylvan woodland, into which the sunlight breaks in flickering spots. 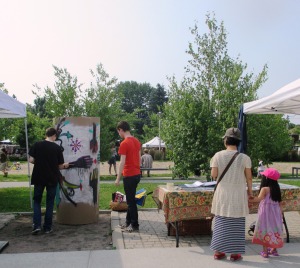 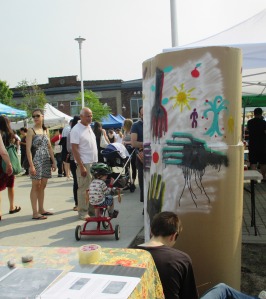 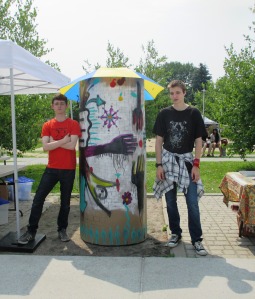