Picturing Immigrants in the Ward  was an exhibition on view at the City of Toronto Archives June 2012 to May 2013. Sarah Bassnett, one of the curators came by the market last Saturday. We sat down at The Stop Market Cafe and she took me through how photography had been used to shape perceptions of Ward residents in the early twentieth century. 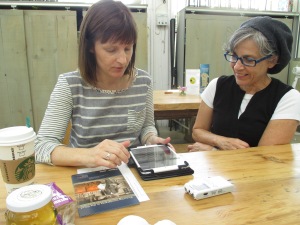 Press Photography of the Ward

There were a handful of Toronto newspapers all were constantly struggling to get by and some played on the fascination with “foreigners”.  However, there was a stark contrast between two of them in particular in the way that they used photographs to convey a message about immigrants.

The Toronto World, with its working class readership was more apt to use sensationalism. It included a heavily illustrated section on the weekend and used quite a few of James’ photographs. Some subjects that appear quite mundane such as children with their carts, a little girl holding an even littler girl, etc. in the context of the newspaper and the captions and the combinations of photographs was turned into something more sensational.

The Globe had a very different agenda. It was a national newspaper aligned with the Liberal Party and actively supporting its immigration agenda as an element of nation building. Its more educated readership was being appealed to for leadership in helping to transform newcomers into Canadians.  Jews in the Ward along with other immigrants were portrayed as “foreigners” but with the long view that they could become Canadian.

The photographs above, published in The Globe, reflect the contemporary social science classification of different types of people. This kind of presentation of foreigners appealed to more educated readers because it borrowed from the discourse of the social sciences. One of the important goals of anthropology at this time was the racial classification of people.  The Globe borrowed the typology approach to represent the people who might want to immigrate. It also reflected the nineteenth century understanding of races where Caucasians were at the top and the darker your skin the lower your place in the hierarchy.

In contrast to these stiffly posed immigrants, William James’s images of immigrants reflect his interest in them as people. He was a very early human interest photographer. He captures their potential, their liveliness. He’s interested in the dynamism of humanity and I think that’s one of the reasons why people still like his photographs.

Health Department Photography of the Ward

Arthur Goss worked as a photographer for the city; he would be sent out on assignments by different departments. This is an example of one of his photos taken for the Health Department.

So here what dominates is the details of the slum and the figures are receded into the background as though they’re just part of the environment. They’re not the subject of the photo as in William James. And the caption of the photo is the address of the place.

These photographs are being used within the context of developing government programmes and policy. There isn’t a human interest focus; however, when you look at the breadth of Goss’s work you begin to see the way that he’s engaging personally with the subjects. There are some very lovely portraits, although the people are labeled by their social function rather than their names.

The Health Department obviously at this time had such a big role to play in the decisions that were made about the area because it was being designated as a slum and in need of social improvement. There was an emerging discourse around sanitation and health spearheaded by the Medical Officer of Health, Dr. Charles Hastings. He also really believed in the power of photography and produced photo-illustrated booklets and pamphlets that were distributed in doctors’ offices, clinics and other public places.

Report of the Medical Officer of Health : dealing with the recent investigation of slum conditions in Toronto, embodying recommendations for the amelioration of the same… (1911)  Pdf File

Photographs of the Ward by the Bureau of Municipal Research

Photographs were also used by the Bureau of Municipal Research, a group of citizens, mostly businessmen who believed in civic reform. They were building on the idea prevalent in New York and other American cities that to improve a city you needed to improve its governance, the way it is managed.  This involved stamping out corruption, making politicians accountable, determining whether the systems for land assessments, taxes, etc. were effective and efficient. They looked at the health of the city as the business men and accountants that they were.

The Bureau campaigned to get citizens interested in their city, to vote, to be active, to voice their opinions, to say that there’s a problem when something isn’t happening as it should. They used photography in a report on the Ward. Again, those photographs look at the slum conditions in relation to having clean-up days, getting rid of condemned buildings. It’s an agenda  organized around making things look better rather than actually figuring out how to help the poor people who live in these slums because they have no other place to go. 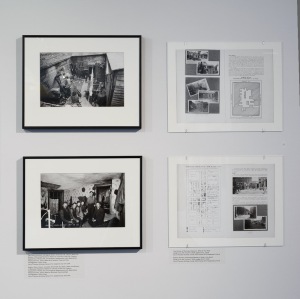 How is the importance of private property and home ownership linked to citizenship?  I guess that it was assumed that once you become a ratepayer, you’re literally invested in the health and appearance of your street and neighbourhood.

Yes that was part of it. It’s a kind of entry point into the discourse of citizenship. It’s about: How do you act?  What’s a good citizen? What does a good citizen do? Well, you become active in your community and you do all these kinds of things.

And that was, as you say, the antithesis of the North American ideal of private individual property ownership where exterior and interior are very separate. In the Ward there was a lot of communal, mixed use space.

Among the social service agencies in the Ward, the Central Neighbourhood House was the only one that used photography in any significant way at this time. They used it in their monthly newsletters and in their publicity. Photography was used to illustrate the value of their work in appeals for funds. This fundraising was crucial because it was not affiliated with any of the religious charitable organizations.  They were the only non-religious social service agency among the many Christian ones operating in the Ward. There were lots of new immigrants who didn’t like the Christian proselytizing tied in with the social services and the Central Neighbourhood House was preferred for this reason. It printed a little pamphlet with a picture of a house on it, trying to portray themselves as just part of the neighbourhood. And it especially catered to children, because it’s through children that you educate the parent. The images highlight model behavior, in the form of such activities as sports teams, folk dances, etc. This is how immigrants were supposed to slot themselves into the larger narrative of citizenship.

I think these are a counterpoint to the newspapers’ sensational photographs of the Ward. These are images in the Ward but of supervised activities. You see the settlement house workers with groups of children in purposeful behavior rather than just hanging out on the street. The betterment narrative is seen in these photographs.

Studio Photography and The Hebrew Journal

There is a way that photography can be used to present people in the way that they might want to be seen. The last section is family portraits, this one is a wedding couple, this three family members going to a wedding. They are from the Ontario Jewish Archives, which has a collection of these materials. There’s not a lot of information with them but my research assistant and I were able to track down that these were people who lived in the Ward. This type of photography was used by new immigrants to negotiate their process of acculturation. The studio portraits were especially meaningful for Jews many of whom had fled persecution and were experiencing discrimination here. They used photography to negotiate both assimilation and difference.

So these are portraits of acculturated Jews, they’re presenting themselves, not like some of the Jews in the Ward photographs where men have black hats and they’re clearly carrying the chickens and ducks…  We don’t know if they were lower class or middle class people. There was certainly a mix of classes in the Ward, not everybody was in dire poverty. Photography allows that performance of what you want to be. Anyone who could get a portrait would get one when they were being married. Marriage portraits include a greater diversity of people than in any other kind of portrait. 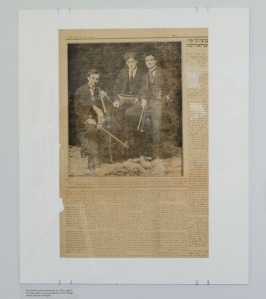 This is from The Hebrew Journal and, again, you see the subjects of this portrait presented as acculturated. They are musicians, three brothers who are here for a concert.  This newspaper, like some of the others in Toronto, was barely keeping itself going. It very rarely printed photographs because they were expensive to reproduce, and this one is given prominence. Obviously, because it’s written in Yiddish, it is for Yiddish readers, clearly for the immigrant community but at the same time presenting an image of acculturated Jews. In these published photographs there’s an acknowledgement that the musicians are part of the community but also take part in the mainstream, the Canadian community. The portraits represent middle class respectability that we don’t see in those newspapers, especially the Toronto World depictions of Jews in the Ward.

Contemporary Art and Photography of the Ward Today

The other component of the exhibition was artist Susan Dobson’s photographs of the contemporary appearance of the Ward. Why was this important to the exhibition?

I think that it was important to consider what is happening now to the Ward. It was in the midst of intense commercial and residential development—the expansion of the Eaton’s Centre and new condominiums. I think there’s an interesting parallel to the photographs of the early 20th century in the exhibition. A century ago the area was in poor condition because landlords were holding on to their properties knowing they would escalate in value but letting them become rundown. There’s a kind of parallel economic narrative; Susan Dobson’s photographs make one think about what happens when we give ourselves over to strictly economic reasons for doing things to the city.