Sliding on snow and ice helped Torontonians claim open spaces for public parks a century ago and, more recently, at the Wychwood Barns Park. 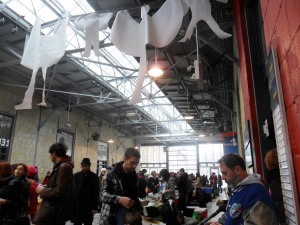 High Park for its accessibility by streetcar, frozen pond, trails and toboggan runs was the most popular city-run park during the winter.

By participating in outdoor sports you presented yourself as enterprising, fit and sociable.

As parks came to be regarded as essential for city beautification and public recreation, the Parks Commissioner’s budget grew. 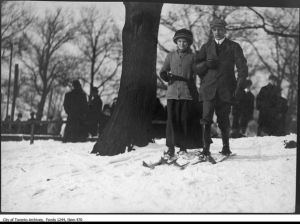 Photos in Saturday editions of local papers, most notably, The Toronto Star Weekly, celebrated how the city came together in its public spaces.

The Sunday leisure habits of Torontonians became a hot topic of discussion in the winter of 1912 as photography in local dailies held a mirror to what was going on in the parks.

The Toronto Daily Star had the highest circulation among handful of local dailies. Its pictorial weekend edition was launched in 1910.

Star editor Joseph E. Atkinson  was a Liberal, progressive reformer and Methodist.The paper campaigned for the rights of the working class, the creation of a “social safety net”, public housing and parks. 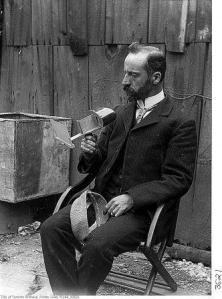 The local paper often published the work of free-lance press photographer William James who also sold his views of the city as postcards and stereoscopic images. 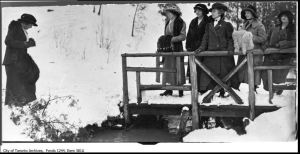 The Star promoted parks through amateur photography competitions. It also published artistic landscape photos of the most popular recreation zones.

As well as revealing the picturesque aspect of parks, photography was able to increasingly capture action scenes.

Transformed by snow and ice many open spaces that were not public lands were claimed as playgrounds in winter.

The City maintained 32 free skating rinks,  including one on Hendricks Avenue and St. Clair West, and 18 hockey rinks.

Catching the modern passion for mobility and speed, a bob-sledding craze took hold in Toronto.

In an era that celebrated team endeavours, groups in long toboggans or sleighs quickly bonded in the thrill of the ride.

High Park, where the City had installed a monumental toboggan run, became a magnet for spectators. 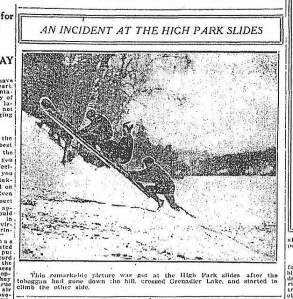 Among the attractions was the inevitable witnessing of collisions and spills, The Toronto Daily Star reported accident statistics daily from the city’s toboggan runs. 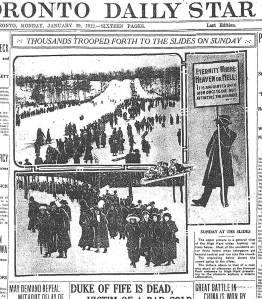 However, it was the danger to the spiritual welfare of Toronto citizens that drove the “Lord’s Day Alliance” to successfully lobby City Council to prohibit tobogganing on the Sabbath.

“Amusements” such as tobogganing or other thrill-seeking activities were denounced from many pulpits as contrary to the rest and reflection demanded by the Lord’s Day.

A “Citizen’s Committee” petitioned City Council while it was debating the anti-tobogganing bylaw. The freedom to slide was important to public health. Moreover, it represented workers’ right to enjoy humbler versions of outdoor sports that were a feature of the lives of the well-off.

Although the bylaw was passed by City Council it proved impossible to enforce. However, the toboggan runs had hit  their height of popularity when sliding was an act of defiance that drew thousands to High Park. 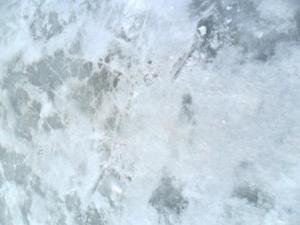 In the late 1990s, Peter MacKendrick, as part of a local movement to save an abandoned streetcar barns yard for use as a neighborhood park, began to flood the vacant lot for use as a shinny rink.

The volunteer-managed rink became a meeting ground for neighbors who took up the cause of creating a new park that incorporated the barns.

Reflecting local hostility towards the proposal  of maintaining the barns, a citizen whose property abuts the park called the City and requested that the slippery patch of ice be salted.

Phone calls went in to Ward 21 Councillor Joe Mihevc who promptly called the City and said, “What are you doing salting a community skating rink?! That’s just un-Canadian!” 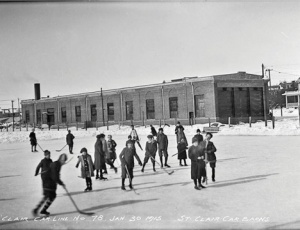 This City Works Department photograph of children skating beside the first barn dates from the period when Torontonians sought  out open spaces to claim them as their own through play. 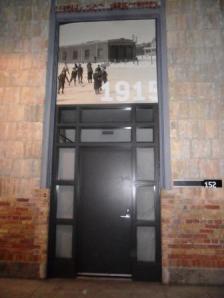 It was used as an emblem by local residents who wanted to incorporate the memory of  the site’s previous uses into the park design and, at the barns, marks the role of photography and play in the development of Toronto parks.