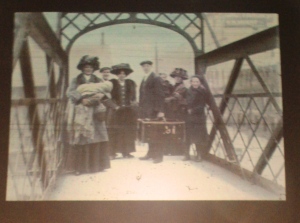 By the early 1920’s William James Sr. claimed to have two decades worth of documentary photography that he had produced for Toronto daily newspapers. He decided to capitalize this stock by offering negatives for sale as part of his commercial photography business.

To highlight the quality of his work, James presented lantern slide illustrated shows. The projected images, having been published as news alongside a story or caption, were immediately recognizable as public records of the past. It was at that point that the James collection, spanning the period of the city’s most profound transformation, was launched as a gallery of local memory.

The majority of the slide images in the City of Toronto Archives’ James Family Fonds exist also as black and white prints that can be seen online. The slides are organized into Series 2119 consisting of a hundred sets of around 50 slides each. According to Archives staff, to scan them would require breaking their glass mounts and so they cannot be made available through digitization. They are documented in color microfilm to reveal the hand-tinting on many of them. The public can view them in the research hall but the color can only be seen on the old-fashioned microfilm readers that don’t scan and copy. This presented a problem for reproducing the works discussed on this blog post. To illustrate the nature of the lantern image in token form I took shots with my camera of the microfilm reader screen. The results are less than satisfactory but they do hint at the unique sense of space achieved by the back-lit hand colored image that would have been a strong selling point of the lantern slide show. 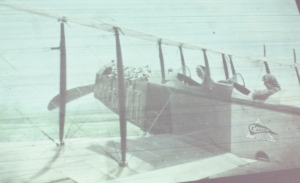 The scripts for the shows have long disappeared but it is entertaining to use the individual images and their set sequence to recreate them. That James’ commentary usually included some a biographical element is evident in, among other images of himself, the thirty-ninth slide of set 80 showing a hand-made billboard. It promotes his Niagara Falls travelogue and frames the enterprise of James & Son at 250 Major street (where the family lived until 1921) as an ongoing effort to conserve the present for future use:   “Our collection of images made for the press principally during a period of 20 years provide endless pictorial matter.”  “AND WE ARE STILL MAKING PHOTOGRAPHS”     “PHOTOGRAPH IT, IT THEN BECOMES AN ALWAYS WELCOME RECORD OF THE EVENT”  Despite the breadth of visual memory embodied by James & Son they were in fact, like many Torontonians, relatively recent arrivals to the city.

William James (1866-1948) landed in Canada in November, 1906 with his wife and five children. They may have been, like the majority of Brits entering Ontario, economic refugees hard-hit by unemployment at home. This wave of immigrants was not the answer to the province’s scarcity of farmers. It was made up of laborers and skilled tradesmen who relied on an urban economy and Toronto was where they stayed. Unfortunately, they encountered a city with high unemployment. With their few resources depleted by the long journey, the newcomers faced starvation and homelessness. 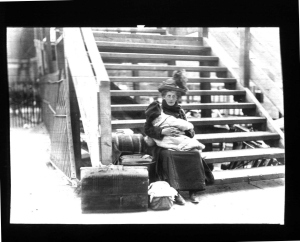 In an absence of federal or provincial relief or settlement programs, the care for the many needy immigrants fell on the city and its independent charitable and benevolent societies. Stretched beyond their capacity, in November of 1907 a deputation demanded the government that it control the type of person that was being admitted into the Dominion. Immigrants, instead of being perceived as inspirational figures were an economic drag. 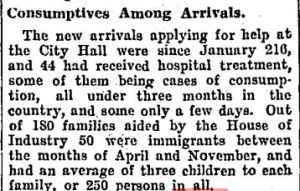 The grim climate for immigrants at the time of his arrival inspired James to become a life-long member of the British Welcome League (BWL), a charitable organization formed to meet the crisis in 1907 through providing free meals, overnight accommodation and settlement services near Union Station. At least two of the magic lantern series that James produced in the 1920’s celebrated the BWL and its history alongside the views and important events that would have intimately shaped immigrants’ sense of their new home. These, set#80 and set#71 can be viewed by clicking here. 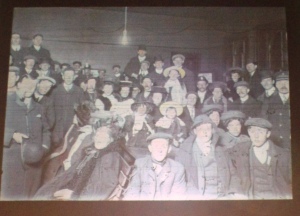 The Globe took up the cause of building public sympathy for British immigrants through articles and photographs representing them as hard-working, family-oriented and sober. During the winter of 1908 it  set up a relief fund for the residents of Shack town. James’ photographs of the massive BWL dining room filled to capacity vividly conveys the numbers served there daily. Other published examples of his photographs of British newcomers were intended to frame them in the best possible light for a Toronto public skeptical of the value of immigration.

“Current Events Captured By the Camera, Lessening the Sorrows of Toronto’s Unemployed” The Globe Feb. 13, 1909 A3 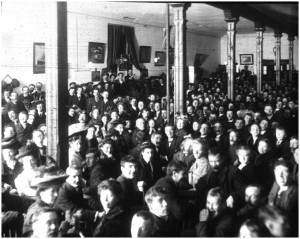 “New Citizens from Britain Received by the Welcome League”, The Globe April 23, 1910 A6 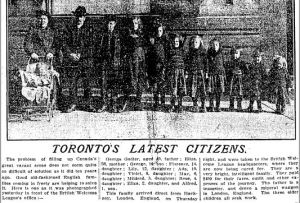 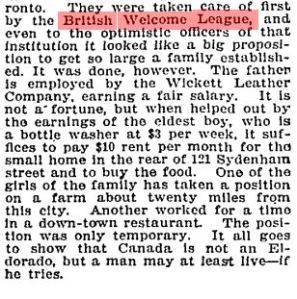 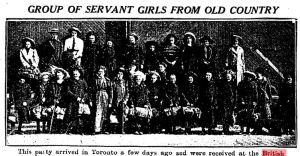 The Star, a heavy user of kiddie pics to sell newsprint, featured a family set of poster children with the story of their happy arrival in Toronto.  The image was later colorized as part of a lantern slide show. 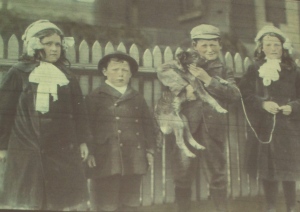 Although the British Welcome League stated that it served all newcomers without bias to race, class or religion, temperance pledge drives and bible class were a cornerstone of weekly activities. It enjoyed a long-standing cooperative relationship with the Salvation Army based on mutual goals of saving souls from drink and damnation at the gateway of their new life. 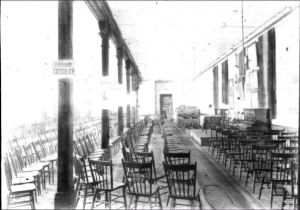 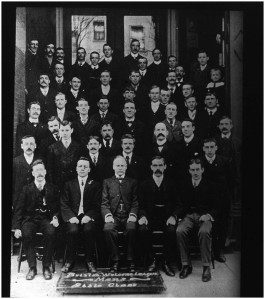 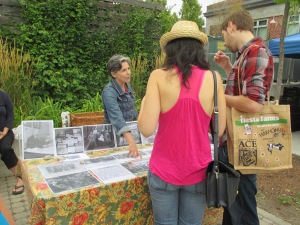 History of the Magic Lantern Show