The lack of open space in overcrowded neighbourhoods created a very visible problem in Toronto a century ago. Children were playing in hazardous storage yards, vacant lots, back alleys, being exposed to disease through inadequate waste disposal, and struck down by vehicles.  Inspired by North American movements promoting the welfare and development of the child, local reformers tackled the problem through the Toronto Playground Association. 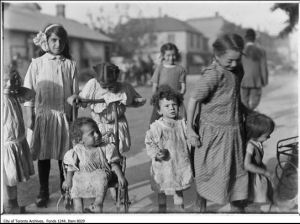 The Association was incorporated in 1909. That first year, the city’s Board of Control and Board of Education gave it approval for provisional use of some school yards. The following year, a handful of “Osler playgrounds” named after Association president and leading donor E.B. Osler were opened in the poorest neighborhoods. With the fanfare of a brass band and speeches by prominent citizens, freshly starched children demonstrated skiils and drills.  The key feature of the playground was the presence of a trained supervisor who ran a systematic program of activities designed to convert toughened, streetwise children into well-adapted and rule observant members of society.

Team sports, games, handicrafts, songs and folk dancing, calisthenics and gymnastics were the activities taught in the playground. However, the first impression appeal for children must have been the equipment. This was designed for a level of risk to make today’s parent weak at the knees. 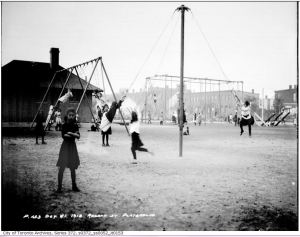 The “model playground”, created with the needs of the child as well as society in mind, was first unveiled as an exhibit to rapt Canadian National Exhibition audiences in 1909 by the Association. Demonstrations were offered at regular intervals by the lake. 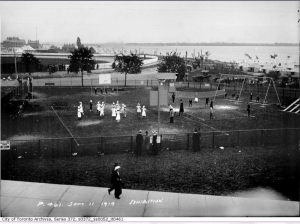 Mr. Smith showed a series of interesting pictures illustrating the difference between the habitat of the child for whose benefit the playground is designed, and the country child who has all the advantages of an outdoor life a his command. The cramped backyards and dusty streets offer little that is helpful or healthy for the growing boy or girl, and pictures of playgrounds and their equipment were thrown on the screen to show wherein they might obviate the difficulties of rearing strong and useful citizens in such an environment.… The value of play was also emphasized for the benefit of any who might think training in this line a very unnecessary education.

The press celebrated these developments with action snapshots of familiar and newly introduced games.

SUMMER IN THE CITY

The local playground movement coincided with a host of campaigns to deal with the welfare of the young in the especially unsanitary conditions that summer temperatures brought to downtown districts. 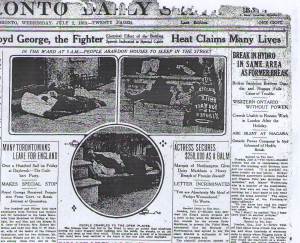 Most heavily publicized among these was the Fresh Air Fund.  Launched in 1901 by The Toronto Daily Star and still running, it was an annual public appeal for funds to give respite to city children through a week-long country camp visit.

Snapshots of little tykes, calculated to pluck the heart strings, were a staple of The Star. Below, a group evidently outside a mission where pasteurized milk is dispensed to the very young.

The Board of Education’s Open Air classes was another program geared to supervising children during the summer months and removing them from the threats of city life.  Noted by the press as an interesting innovation, they were also documented by the Department of Health.

By 1913 the two bodies leading the playground movement, the Board of Education and the Toronto Playground Association, had been brought together as a Joint Commission of the Parks Department. Mayor Hocken joined the philanthropists in taking credit for the popular playgrounds yet it’s clear below that he hadn’t yet yet mastered the political trick of posing within a scrum of happy children.

AT THE CITY PLAYGROUND ATHLETIC MEET the Globe September 20, 1913 p. 7

Infant clinics were located in such playgrounds as McCormick on Brock Street. Playgrounds as a social service and public health outreach site were documented by the Department of Health. 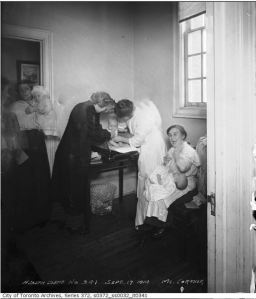 Supervisors hired for the 1913 season were required to attend an Association sponsored lecture series. The breadth of expertise and reform agendas represented by the speakers underscores how the issue of playgrounds neatly brought together the varying strands of child-centered activism. Torontonian reformers relied most on the professional advice and case studies of pioneering child and social workers in Chicago.

The inspiration for the 1910 founded University of Toronto Settlement House was Jane Addams whose Chicago “Hull House” services were developed by university faculty and students from observation and life among the poor. Rigorous research and advocacy in combination with grass-roots campaigns and development of resources for self-help were signal features of the Settlement work.

Addams developed a playground at the Hull House doorstep to attract children and mothers.  In recognition of this strategy, The Toronto Playground Association in 1910 offered to help procure “swings and other outdoor amusements” for local missions and crèches (daycares).

IS SOCIAL SETTLEMENT WORK IN TORONTO ACHEIVING ITS AIM IN UPLIFTING THE MASSES… NO RELIGION IN PROGRAM The Star Weekly  June 7, 1913 p.1

Jacob Riis, celebrated American urban reformer, spoke at the Association’s spring 1913 lecture series. This anti-poverty activist and photo-journalist who introduced flash photography in combination with unflinching descriptions of the horrors of New York tenement life, was well known through press reports and his best-seller, How the Other Half Lives: Studies Among the Tenements of New York  1890      Other speakers included Miss Hofer of Chicago who lectured about the culture of children’s games and songs and how to bring folklore into playground activities. Representing the MacDonald Movement  Prof. S.B. Mc Cready of Guelph spoke on the importance of nature and gardening for children. Last but not least were the leader in maternal and child health reform, Toronto’s Dr. Helen MacMurchy and the first children’s librarian in Canada working at the local public library, Lillian H. Smith. The lecture series situated the playground movement with other cutting edge educational, anti-poverty, and public welfare developments.

NATURE AND “THE PLAY INSTINCT”

Play areas and equipment that gave children the chance to explore, invent, problem solve and negotiate were of paramount importance to such progressive educators as J.L. Hughes Superintendent of Public Schools and member of the Toronto Playgrounds executive committee. Kindergarten specialists and other education experts demanded playgrounds equipped with “moving parts” . These were elements such as blocks with which children could create alternative play scenarios. The sand pit, considered the ideal environment for such “world-making” was represented in a minor way at the Elizabeth Street Playground in the form of a sheltered sand box. 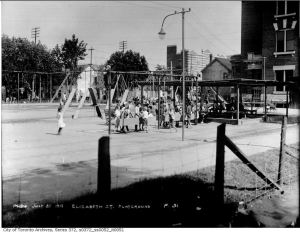 Providing contact with plants and gardening opportunities to inner city children was considered an important antidote to the immoral influence of the street. At an Association meeting Hughes announced that he had arranged for the Plowman’s Association to prepare between fifty and one-hundred vacant lots for cultivation.

Hughes also led the Toronto Playground Association’s charge against picture shows, demanding more stringent filtering of movies by the Board of Censor and claiming that, “…the moving picture shows were hurting the eyes of children as well as tending to inculcate habits of spending money.” 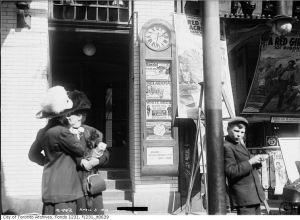 To many, the problem of the city’s deteriorating moral standards was embodied in boys who wandered freely about the city. A dedicated Juvenile Court, housed in leaking quarters at City Hall, in 1912  dispensed justice to over one thousand children who came before Commissioner “Boy’s Big Friend” Starr. 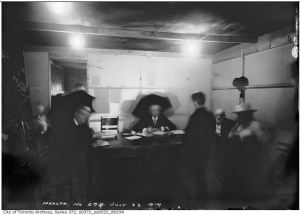 In an appeal for donations, the Toronto Playgrounds Association stressed that playgrounds decreased levels of truancy and juvenile crime, “The child who is trained to play with all his might and honesty with his young companions is more valuable to himself and the community than the child who is kept away from play by the harmful attractions of amusements never meant for children.” 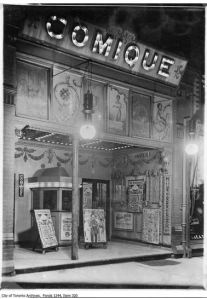 Pointing to the explosion of cases before Juvenile Court, in 1912 the Board of Education’s Dr. Helen MacMurchy sounded the alarm to the Board of Control. The city was rampant with children committing not only the crime of truancy but also vagrancy and “incorrigibility”.

Mr. Teller, Superintendent of Playgrounds Chicago, picked up this theme in his May 1912 lecture for the Playgrounds Association titled “The Boy Problem”. He pointed to the legion of young newsboys on Toronto streets, as a distinct social problem and recommended that a newly formed philanthropic organization dedicated to “rescue the young from temptation and vice” tackle the problem. 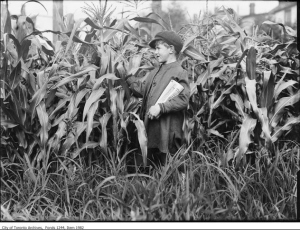 The Working Boys Home was established in the 19th century to wean boys from a life on the street and dedicated especially for newsboys and shoe blacks. The rags to riches story of Sammy Lichtman published in 1913 by The Star may have been one way that Joe Atkinson, the reformist editor, appeased his conscience. 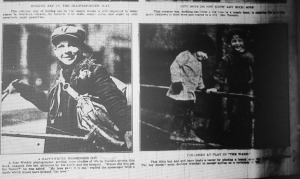 That same year, the forty one boys in the institution who renounced some of their wages in return for room, board and the chance to take night classes were in danger of being relocated. According to the director, “… the boys are too close to the cheap shows, and we need to be in a more suburban locality, where there will be less temptation….”

CHILDREN IN “THE WARD”

In what was known locally as “the Ward” conditions and problems resembled those of the Hull House Chicago neighbourhood. In Twenty Years at Hull-House 1911, Jane Addams described how immigrants’ rural customs and narrow job prospects caused them to unwittingly create a toxic environment for their children.

…the normal amount of waste was much increased by the Italian and Greek fruit peddlers, and by the residuum left over from the piles of filthy rags which were fished out of the city dumps and brought to the homes of the rag pickers for further sorting and washing. 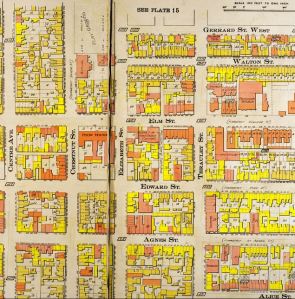 In 1913 the Toronto Playground Association lobbied for changes to the factories and shops act so that children’s work day hours would be capped and those under fourteen barred from factory employment.

The faces of the children looking at and posing for the camera show a bravado and strength of character developed under a specific cultural and urban context.  Quickly learning the language and ways of the new culture, immigrant children became both indispensable to and independent from their parents.  As English speakers they were more likely to find higher paid employment and so withdrawn from school at an early age to work in factories and shops.

Acknowledging the reliance of immigrant families on their children’s wages, there was a proposal in 1907 to follow the American example of providing the family with compensation for lost wages. The Globe ran an article highlighting the problem that described a fifteen year old runaway who had taken her younger brother with her, determined to keep her wages from her parents. 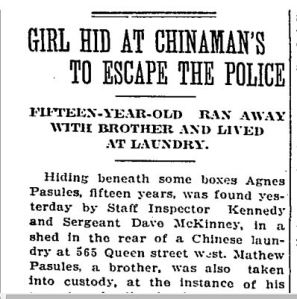 Addams described how the immigrant children’s self-sufficiency and confidence would lead boys, especially during warm summer months, to live on the street.

Many of these children have come to grief through their premature fling into city life, having thrown off parental control as they have impatiently discarded foreign ways. Boys of ten and twelve will refuse to sleep at home preferring the freedom of an old brewery vault or an empty warehouse to the obedience required by their parents, and for days these boys will live on the milk and bread which they steal from the back porches after the early morning delivery.

The Toronto Horticultural Society encouraged children to grow flowers and vegetables in their yards, offering awards for the most successful results. The competition was abandoned after several years for a general lack of enthusiasm

Inner city kids’ self-sufficiency and competitiveness was harnessed every summer by the The Star’s Swat the Fly competition.  Highlighting the connection between dirty environments and disease spread, prizes were awarded to those who collected most dead flies from their home and neighborhoods. The race was given momentum through the daily’s pages with regular fly-counts from competition leaders and photographs of triumphant winners.

Spacing magazine: History of Playgrounds in Toronto by Erica Simmons