The Wychwood Barns Community Association sponsored their first curated exhibition at the Peter MacKendrick Community Gallery from February 13-16, 2014.  It demonstrated the spirit of open-ness, the collaborative practices and the sensitivity to place essential for artists to create meaningful work for a neighbourhood cultural hub. It also reveals the range of media and strategies—performance, poetry, bookworks, video and painting—that are not commonly seen in commercial shows and yet are important for community oriented art.

This exhibition is the culmination of a call for submissions which invited artists of all disciplines to respond to the theme of the model of community (which includes artists) as a nexus for change. 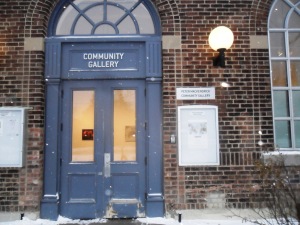 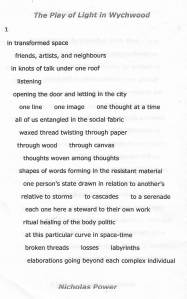 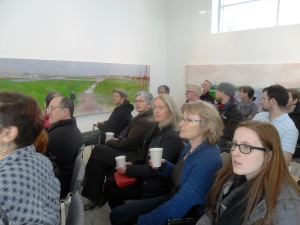 How are paintings of an airport now a park in the centre of Berlin relevant and meaningful to the people of Toronto? How did Tempelhofer Park come about? How could four square kilometres of prime land in a densely populated city avoid development and be allowed to exist as an undefined space? 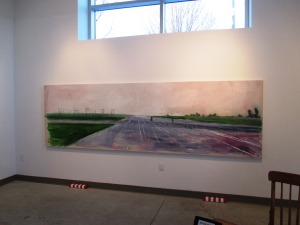 In order to address these questions, I looked at how I had addressed cities in my previous work. I began with the most recent, a series of pen and ink drawings I did in 2012 following a trip to Naples Italy. What struck me there was the way Neapolitans live immersed in history. The architecture and art that surrounds them, that almost threatens to overwhelm them, reflects complex interwoven histories that aren’t preserved as separate things in museums but internalized as an inseparable aspect of their civic identity. Being a proud Neapolitan means constantly confronting your history even as you live inside it, literally, metaphorically. This made me ask myself, ‘what does it mean to be a proud Canadian?’ … 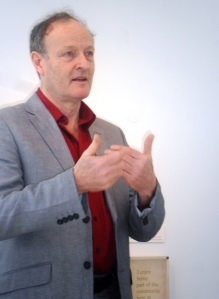 I first saw the vast stretch of land of the Tempelhofer Park without knowing its history. The Nazi government began a massive reconstruction in the mid-1930s which included using forced labour to build Berlin’s first concentration camp on the airport grounds. During the Cold War, after the Soviets closed access to West Berlin, the air strip at Tempelhofer was the one remaining point of access. During the Berlin Airlift the Americans dropped supplies at the airport to keep the city going. In an echo of Leena’s performance yesterday, one American pilot famously dropped bags of candy attached to small parachutes over Tempehofer. They were meant for the children of Berlin who got to know the pilot’s signature moves of wiggling his wings, a sign to them that sweets were on their way…

Tempelhofer airport was closed in 2007 and in 2009 the city of Berlin decided to open it to the public, to offer it as a gift of space to its citizens. When I visited, that open-ness and offer of time to reflect was extended to me.

Do we have the courage to provide spaces with such undefined open-ness and freedom in our own city? Can we reserve a big civic space just for dreams and imaginings, a place where children can play and grow and adults can amble and take time to think? The German word for this is Bewegungsfreiheit, freedom of movement. Tempelhofer suggests the tantalizing possibility that a free-wheeling community can create the change our world needs. 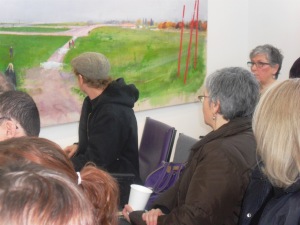 Q: There’s a duality to the Tempelhoffer project. There’s the tarmac that suggests the open-ness to intervention and action but then there’s also the memorial aspect of it that relates to the horrific events that took place there. I’m interested in your point of view in this creation of narratives around open space in cities like Toronto, how do you see the Barns in terms of Canadian experience?

A: I think this compelling aspect in Berlin—opening us to the past and learning from it in making choices for the future. Considering this in the Canadian experience… I think an acknowledgement of or even research into what was there before and discussing it enriches the experience of all Canadians. Extending the curiosity about a site is important.  I think so much is caught up in oral tradition, much of it is not written down but you sense in talking to some of the native people that there is a deep awareness of what was here. Nick, our poet here is writing about the waterways that have been covered up. I think there needs to be a sense of uncovering as a part of development.

Hi, I’m Rebecca Singh. This piece on the wall is mine. It is a design manual for an installation called Canada’s Smallest Theatre and it is still installed in this building. I will talk about it here but I will also invite you to come and see the space.

I’m one of the inaugural tenants of the Barns. This section has 28 live work studio spaces for artists and when we moved in we were invited to modify our spaces to suit our work needs. For example, my upstairs neighbour makes artwork with glass so she’s installed a kiln, a torch, and she creates her work in her studio space and also resides there with the rest of her family.  There are many people who are writing, who paint, etc. My art form is theatre so I eventually came to create Canada’s Smallest Theatre. 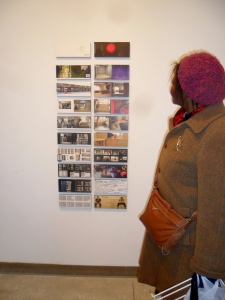 At the beginning it was undefined how the Barns artists were going to work together so I became a member of the Wychwood Barns Community Association’s board of directors which manages this gallery along with Ruth. And, I lasted about a year. This exhibition, five years later is the first time an artist in the Barns is participating in a community association sponsored show. This moment was long in coming and I’m thankful to Ruth who stuck it out on the board.

When I first moved into this space I became very interested in small theatre, intimate performance spaces and the possibility of creating work where the audience is very close to the performance. I think it creates a different kind of energy between the audience and the performer. It allows the spectator to understand what happens on a stage. I see the stage as a place of infinite possibilities and having a small distance between performer and spectator increases that possibility and makes you think about yourself on the stage in certain ways as well.   … 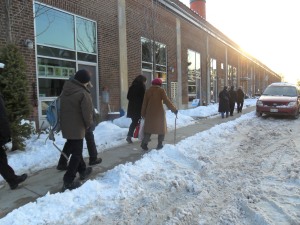 In 2008 when I moved into the Barns. I lived here for three months and then was invited to Germany to work with a theatre director there. I was in Stuttgart for three months and my roommate, Henrik, was a set designer. As I was leaving he asked me, ‘What are you doing next?’ And I said, ‘I have no idea because my studio was supposed to be this great multi-level thing and it’s not, it’s just one room. I had all these visions of making a small theatre but I think it’s just completely impossible.’

So, I came back and got involved in the community. I did something called Artists Week, a ten day festival that allowed all the artists here to do a show. We rented the gallery; we wanted to show the community who we were.

In the meantime my friend Henrik built a tiny model of the studio on his desk in Berlin and he sends me a picture of it about eight months later. And, I thought, ‘OK now I have to do it.’ It seemed like the perfect way to collaborate and continue to work with this person who I very much enjoyed working with before. I thought, ‘what an amazing opportunity to do a project like that in a building like the Barns, after all Artscape’s tag line is It starts with space.’

I brought Henrik over and he stayed here for a summer. We measured and figured out what we may have to change, what permissions we would have to get etc. He flew back to Berlin and we put together a very nice proposal with pictures and diagrams of what we would do. We presented it and got permission. I fund-raised using Kickstarter and a multitude of people helped make it happen. We had to buy lots of wood, employ a carpenter, etc. 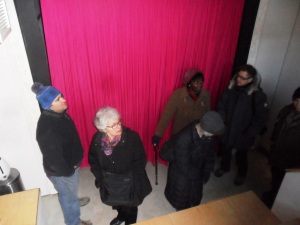 In the meantime I continued to collaborate with different people. I collaborated with Ruth; we made a graphic novel together. I started working with New Adventures in Sound Art, a really great organization in the Barns. I continued developing relationships with the other artists living here.

In the summer of 2012 we built Canada’s Smallest Theatre and took part in Nuit Blanche, an overnight art festival. I decided to do an event called “Tell Your Story.” Any member of the public could show up at table in Barn 2, pick a costume piece and a prop. You had a menu of lighting choices—flashing party lighting or mood lighting, etc. You had six minutes on stage. Over the course of the night we had mini-performances on my stage. For me it was an act of giving the stage over to the community. It was very well received and we were booked until two in the morning. …

Then I decided I wanted to get back to the type of theatre that I used to create in the theatre world. With the help of a very good director and lighting designer, I learned 50 Shakespeare monologues that I performed over the course of the night. Between the monologues I had an opera singer, I showed film, I had a story teller… there were lots of little 10 minute performances that happened in the space. I have recordings of all of them and eventually there will be opportunity to share some of this. They were all local artists, with the exception of one person who came from Quebec. Either people were inspired by the theatre space or this building or the neighbourhood. Some were local people knowing they were sharing something with a local crowd coming for Nuit Blanche. There were some really beautiful new pieces that were created so I was very proud of that. Joe Mihevc wrote a letter of support for the project and we got recognition from City Council for doing an event of municipal significance. 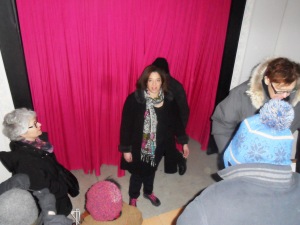 In the future, along with showing people the stuff that has been happening in the space to date, I’m going to be focusing on creating new and different kinds of work that can travel. For example there’s an actress who had never written her own material. She created a one-woman show for my Nuit Blanche project. She recorded it and it’s been seen online by 1500 people. That’s the kind of stuff that makes me very excited. The theatre has twelve seats. It’s an art project, not a money maker. I’ll be paying for it for years.

In the last couple of years many new small theatres have opened in Toronto but this one was one of the fore-runners.

I wanted to do some writing and post it on the Wychwood Barns Community Association website and have the community to have an artistic response. There’s some buzz along Benson Avenue about people who want to have a street party and close the street. Leena, another of the exhibiting artists, invited people to give her a small act that was then passed on to somebody else. I thought for anyone who was inspired by the possibility of a twelve seat theatre, I would invite you to tell me your idea and I will take a picture and maybe we could give that to be posted on the Wychwood Barns Community Association website. 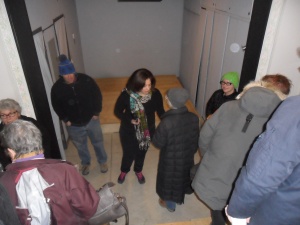